Last month, members of the organization removed the Serbian Privatization Agency’s plaque as an act of protest against what they call the “systematic destruction of the economy”. Balkanist recently spoke with founder Milenko Sreckovic via email about privatization in Serbia and the movement’s mission to reach out to similar movements around the world. 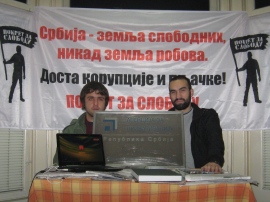 This entry was posted on уторак, 14. јануара 2014. at 5:04 pm and is filed under Аrticles on english. You can follow any responses to this entry through the RSS 2.0 feed. You can leave a response, or trackback from your own site.